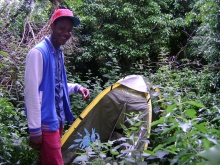 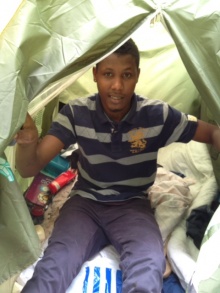 Nelson (23) left behind a troubled life in Portugal to find himself again homeless in Andover, living from a tent in the woods. Now he's working with Fixers to encourage more help for the homeless.

Nelson Artiaga has faced more problems than many in his lifetime, from struggling to survive the Portugese slums as a teenager, to living in a child’s tent in woods outside Andover for over a year.

Now Nelson has sheltered accommodation, thanks to local group The Junction, and his life has been turned around. But not too long ago, this secret tent was his home, and he felt helpless.

“People just pass here and you hear everything. I had to stay in the corner when it rains because the tent is not good enough for heavy rain. I’m from a hot country so I feel the cold, but it was so cold here,” he said.

“When I used to live here, no one would speak to me. I used to go to the Junction until 5pm and then I would come back here and pray and pray until I fell asleep. Sometimes I would go three or four days without food. All that experience made me grow up and appreciate the things I have more, too.”

During his teenage years, a family breakdown meant Nelson found himself living in the slums in Portugal. This proved to be tough for him as his parents disappeared when he was 14, leaving him to live alone throughout what should have been some of the best years of his life.

And Nelson had no possessions, either. As gangs ran the slums, Nelson found his hideout being robbed all the time. It was not long before Nelson joined in with crime and found himself spending two-years in a young offenders institution.

Yet it seemed help was at hand when his Father’s sister came into his life upon his release, offering him food and shelter in Andover, Hampshire.

However, with no work, Nelson soon found it difficult to pay his share and was made homeless a little over a year ago. It was then that he found a tent and set up camp in some woodland near Andover, where he has remained relatively undiscovered ever since.

Now he’s working with a local youth centre, The Junction, to try and get his life back on track, learn new skills and feel more positive every day.

With the help of Fixers, Nelson is making a film to show just how tough homelessness can be, and how you can still change your life for the better with hope and a helping hand. He wants to show that homeless people are by no means drop outs from society, and that more help should be given to help the homeless.

He also wants to return to Portugal in the future to help those in need in the same slums he grew up in.

“I want to show people just where I live,” he says, “and show them that even though it is not good to be homeless, homeless people are no different from anyone else.