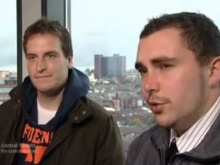 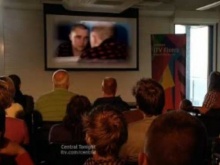 The screening of the Fixers film 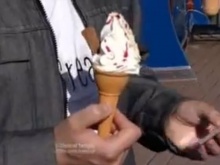 Free ice cream and a copy of the film

Geoff Reeves (23) and Tom Simpson (25) are using their Fixers film - and some ice cream - to help spread their message about young people living on the streets.

The two Fixers from Stoke-on-Trent have both experienced homelessness and the negative impact that it can have on relationships.

Their story was broadcast on ITV News Central in September 2010. Watch above.

‘I was homeless for just over a year and the stigma attached to it is that it’s your fault in one way or another,' says Geoff.

‘In the beginning it is very easy to find someone to help you out, but then as time goes on, those people that were helping you now see you as a burden.’

With the help of Fixers, Geoff and Tom created a film in order to highlight hidden homelessness. They later handed out copies to the public along with free ice cream, encouraging people to spread their message and raise awareness.

In their project, ice cream is used as a metaphor for how fragile family life can be.

‘I think family breakdown is the main reason a lot of young people find themselves homeless,’ says Tom.

‘You can have an idyllic family life, but all it takes is one thing and you’re at the bottom.’

Screening their film to an audience, the Fixers were supported by a regional director of the YMCA, who said:

‘I’ll make the commitment and get the film spread across every single YMCA in the country.

‘It’s just about loving people, and in my experience it’s the people who are on your side that change your life.’

Geoff and Tom's Fixers film has gone on to help raise awareness of homelessness across the country, as it has been shown at YMCA centres nationwide. You can watch the film, ‘Ice Cream’, below.