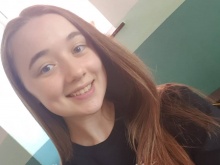 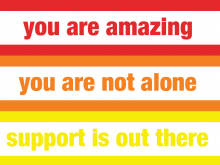 Keyrings for people in the LGBT community 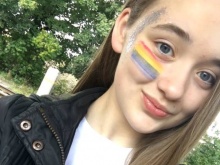 A teenager who had no-one to turn to when she was questioning her sexuality has designed a keyring to help others show people they are part of the LGBBTQ community.

Katie Grant broadcast a video on Facebook when she was thirteen-years-old, telling her friends and family she was bisexual.

‘At the time it was not a huge secret, everyone at school knew but no-one in my family knew…it felt like a big deal to tell them.’ explained Katie, 17, from Sittingbourne.

‘There were people in my family who are homophobic and I was worried they would try and turn the rest of my family against me. But I felt I needed to put my views ahead of my fears.’

Katie, who is studying acting at Canterbury College, doesn’t remember exactly when she realised she was bi-sexual. She does have a memory of kissing a girl in primary school, but explains she didn’t know the difference between straight or gay then.

As she started to learn more about different sexualities at secondary school, Katie began to question how she identified.

With no-one to turn to for support, Katie spent hours watching YouTubers for advice.

‘All I wanted at the time was support,’ she said.

In a bid to help other young people in a similar position, Katie has designed a keyring with the words ‘Gay? There’s nothing queer about it.’ The words can be hidden inside a plain cover and brought at when the time is right.

There are also details of support organisations young people can reach out to.

‘For a long time coming out was such a big part of my life,’ Katie explained.

‘A lot of people go through it. I thought doing a campaign on this would have a big impact.

Katie hopes to distribute the keyrings during Margate pride in August.

‘I hope this inspires people to be true to who they are and be open to the idea of telling the world about something they are passionate about.’

This project was supported by the Colyer Fergusson Charitable Trust.