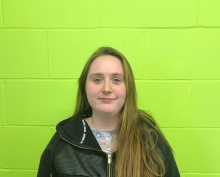 “Round where I live 10-year-old girls are wearing masses of makeup because of what they see online with celebrities. In the long run they’re just going to look ridiculous and they’re not going to feel happy within themselves.”

Twenty-year-old Layne McShane is campaigning for real role models rather than the celebrity kind she sees so many young people following.

With Fixers, she’s made a film comparing her own experiences with that of a young woman, played by an actress, who is obsessed with a celeb she’s never met but who “wears the best clothes and has a whole wardrobe for just her shoes!”

Layne, from Clacton, introduces her own role model: “Hannah is a therapist, she’s a friend and she’s my boss - so putting that all into one is an amazing thing. She’s not fake and I can be myself with her.”

Layne says it’s really important for young people to have someone they can open up to.

“The information people get from celebrities is massively worthless,” she says. “With social media – you can’t message anyone if you need help.

"There’s no good advice, there’s no support. With my boss, there’s massive support. I can call her up, see her and she’ll take time out for me.”

Layne works for Inclusion Ventures, a charity based in Jaywick, a village near Clacton, which has twice featured as the most deprived in England.

It supports young people and gives them opportunities to become responsible members of their community.

Says Layne: “We’ve had a massive impact on some of the kids’ lives. We have made it our mission to get them back into school, to get their education so they can go on in the future, to get what they need and do they want to do.

"I would say that I am a role model to some of the girls. I want to support them so they know there’s someone there if they are having a bad time. So they don’t go into a dark place they can’t get out of.”

Layne’s film will be launched at Inclusion Ventures and she’s hoping to get it into local schools.

“I’d be happy if people see that celebs aren’t the best role model for you,” she says. “The main message is to be yourself and have true beauty.”

This project was funded by the Essex Community Foundation.