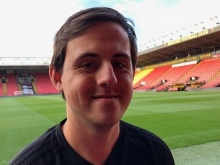 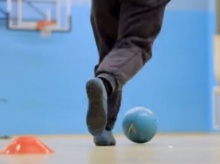 The group want to encourage everyone to get involved in sport 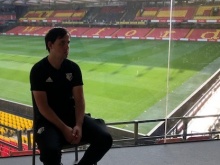 Ben hasn't let his disabilities get in the way of a career in sport.

A group of disabled football coaches from Watford FC have launched a campaign to encourage those with disabilities to pursue their interest in sport.

They have teamed up with Fixers to make a video they hope will empower people not to be held back by their disabilities.

Ben Simms, who suffers from a total of nine disabilities including Asperger syndrome, ADHD and Chronic Diabetes, explains the motivation behind the project.

‘We want to reach out within the community to enable more disabled people to take part and to try and work in sport, whether that be football, or be whatever else their heart desires,' the 20-year-old explained.

‘I think it’s more about other people’s perceptions rather than those of the person with the disability.

‘They can have great ideas, but it can take a lifetime for them to become a reality because so many people have told them it’s not going to happen.

‘There are all these stereotypes that come along with disability, and it’s just about proving them wrong.’

Ben has not let his own disabilities stand in the way of professional success, working his way up from a sessional coach to become the Disability Support Project Officer at Watford Football Club. He has also played for Chelsea FC’s disability team.

‘I received my first diagnosis, for ADHD, at 12, so I grew up until then thinking I was pretty ‘normal’. It wasn’t until secondary school that I started to struggle a bit with the fact that I wasn’t perfect because of my diagnoses, but I soon came to realise that there’s not really anything wrong with me, there’s something wrong with everyone else, in terms of how they see it.

'I don’t really mind what I have, but if other people do, then that’s their issue, and that’s their problem, and they need to deal with that rather than me deal with it for them.’

Ben hopes his film, which will be shown to coaches and young people with disabilities, will encourage people to stand up for themselves. ‘I think it’s important to remember, we’re all coming from different angles, and different disabilities require different support, but you can do anything you put your mind to.’