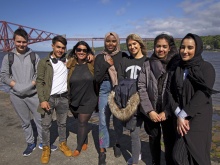 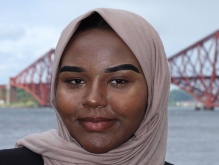 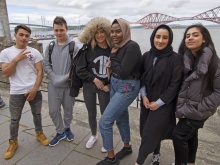 'The most difficult thing when I arrived was language. I found it hard to communicate with people. I felt I was being judged because I couldn’t speak English. It made me feel lonely and isolated.'

Elaf Hussien came to live in Edinburgh from Sudan three years ago.

'There was some racism,' she says. 'There was some nasty stuff because I wear a head scarf. They’d say things like go back home. Some people think all Muslim people are terrorists – it’s not true!'

With the help of Fixers, Elaf and a group of young people from immigrant backgrounds have made a short film highlighting the benefits of cultural inclusion groups in schools.

Almost all have suffered from language difficulties, racism and discrimination.

Fifteen-year-old Elaf says belonging to her group has made a massive difference: 'There are people from all different backgrounds. We talk about our problems and feelings and you feel you’re being understood.

'It helped me become more confident and outgoing. And now I feel proud of my Muslim heritage.'

The aim of the film is to challenge schools and local authorities to do more to encourage cultural integration and tackle prejudice.

In it one of Elaf’s friends says: 'The inclusion group helped me have more of an understanding that there are other people like me out there. People who are also struggling like me and I’m not the only one who feels alone.'

Another says the group enables members to help each other. Other shared benefits have included better self-esteem and pride in their own culture and background.

Elaf is currently doing her GCSEs and wants to study law and modern politics.

The film is due to be launched on February 22nd next year at the Scottish Parliament in Edinburgh. Elaf and her friends will make a presentation to an audience expected to include MSPs, educators and other stakeholders.

Elaf’s film is supported by Action For Children.