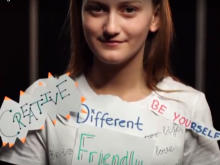 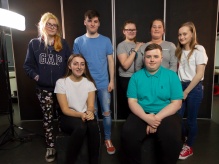 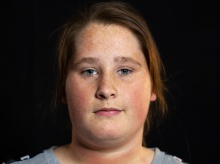 'As a group we felt body image was a serious issue among young people. We wanted to go into schools and show them that it’s okay to be unique, OK to be what you want to be.'

Eighteen-year-old Carly Colquhoun and a group of her friends became concerned about the pressures young people feel to look perfect.

'We think the media play a key part in young people feeling they have to live up to something that’s not real,' says Carly, from Glasgow.

'The internet can make them feel worthless because, with body image, it’s always showing them people with ideal figures.'

One girl in the group says: 'There’s pressure everywhere, on TV, social media magazines. Everyone showing off their perfect lives and perfect bodies.'

Another proclaims: 'I started to hate the way I looked.'

The stickers are then replaced with positive labels such as 'outgoing, lovely, kind, unique.'

One of the group says: 'Feel empowered to love the way you look!'

Another adds: 'When you look in the mirror, focus on the positive!'

Carly explained the reason behind the film was to be positive.

'We wanted to tell young people you are beautiful, you’re intelligent, you are brave,' she said. 'To really give them a boost. Young people should be made to feel good about themselves, not bad.'