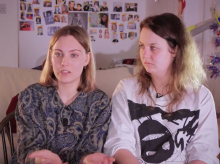 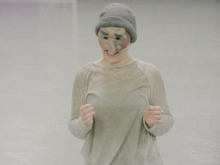 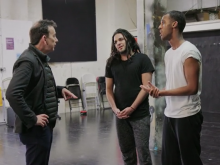 ‘You open up in drama, you have to look at the person next to you, and you have to communicate with them.’

Grace Ludlam, 24, and Madeleine Street, 21, want more people to appreciate that Drama is not a soft subject but a valuable one encouraging students to be more ‘professional and confident’.

The joint Fixers project highlights the value of drama amid concerns some schools are cutting it from the curriculum to make time for STEM (science, technology, engineering and maths) subjects.

Their story was told on ITV News Anglia, London and Meridian East on Thursday, August 9.

A recent BBC survey of 1,200 schools found that 90 per cent had cut back on arts lessons and reduced staff time and facilities.

Madeleine was diagnosed with depression at the age of 16 and felt very withdrawn and under confident. She believes her involvement in drama played an important role in getting her through some difficult times.

‘With growing numbers of young people having mental health problems I think it’s important we point out how helpful drama can be. I found that drama helped me a lot,’ explained Madeleine.

Grace said: ‘Drama forces you to look up and go ‘I’m working with you’. I think that’s really important because in life that’s what we have to do, to work round different people from completely different backgrounds.’

Grace and Madeleine, both from Southend, agree drama training helps young people prepare for interviews and gives them the confidence to work with new people and embrace different challenges.

With growing concerns that parents ‘discourage’ their children from taking drama, the Fixers want more people to understand the benefits such as team building, confidence, and self-esteem.

The two actors hope their campaign will highlight the importance of drama in schools.

Grace added: ‘We want more people to understand its benefits, and make sure drama lessons are available to all.’