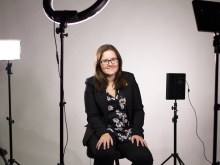 Dionne appearing in her Fixers film 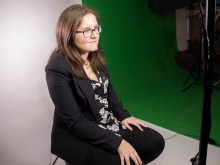 Dionne wants to raise awareness of the debilitating condition 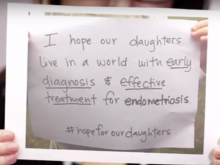 Messages of support on social media

Often crippled with pain because of her endometriosis, a young woman from Edinburgh wants to increase understanding of the condition and encourage those who may have it to get checked by a doctor.

Before her diagnosis in December last year, Dionne McFarlane endured six years of agony as a result of the illness, which is caused when tissue found in the uterus attaches itself to other parts of the body.

The 20-year-old from Edinburgh has now teamed up with Fixers to produce a film aiming to raise awareness of the hidden illness so others can get help sooner.

‘It started with a lot of pelvic pain. Some days it would be manageable, but other times I would be in despair,’ she says.

‘I’m tired a lot of the time and it can be quite overwhelming because you see other people going out, having a good time, but you can’t always go. It can get you down.

‘I had countless trips to hospital, but my symptoms were always dismissed as normal. I knew it wasn’t normal.

‘That was one of the hardest things, it felt like nobody believed me about what I was experiencing.’

Dionne was eventually told she had the condition after having a laparoscopy last year.

As there is no cure for the illness, she manages her symptoms with pain relief and has also had two operations since being diagnosed.

‘Being told I had it was a shock at first, but also a relief because I knew that I was right about something,’ she adds.

‘It was like validation knowing that there was something wrong with me after all and now I could do something about it.’

Dionne’s film shows her explain what living with endometriosis is like and calls on others who are worried about the symptoms associated with it to see their GP as soon as possible.

She wants to share it in schools to educate young people about the condition.

She says: ‘I’m really pleased with how the film has turned out and I feel it really gets the message across.

‘I could have been angry about having endometriosis, but I decided to help others going through it.

‘If this campaign leads to just one other person getting help sooner then it will have done its job.’