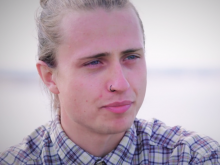 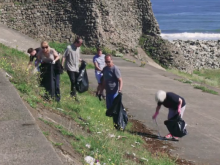 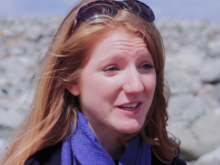 'With us being the bigger species on this planet we should be taking more time to care about it and about the eco systems around us.

'But it seems like at the moment we are doing the complete opposite and focusing more on destroying it than trying to make sure this planet is somewhere people and animals will be able to live for a long time to come.'

Izak Jackson is working with Fixers to highlight coastline pollution and show how people can get involved and help to make a difference.

He told his story on ITV News Tyne Tees on October 5.

The 22-year-old, who lives in Middlesbrough and studies Multimedia Journalism at Teesside University, explains: 'I’m a really keen film maker. I love making movies, it’s one of my biggest passions and I’m working with Fixers to make a documentary.

'The film is going to be all about keeping our coastlines clean and raising awareness of the plastic pollution along the coastlines of the country.'

You can view the film below.

Charlotte Foster, from the School of Marine Science and Technology at Newcastle University, is supporting Izak's project.

She says: 'It’s a very large problem and I think we’re only seeing the tip of the iceberg. What we see is what washes up on the beaches but there’s actually a lot more happening in the oceans that we don’t see.

'It’s out of sight, out of mind. The plastic doesn’t break down so even if it has all been shredded up and become smaller it will remain in the environment as artificial material.

'It gets eaten by the bottom of the food chain - the fish - and they then get eaten by larger animals, that builds up and it goes all the way to the top. As the top of the food chains ourselves, we’re starting to impact our own diets with these plastic materials.'

During his film, Izak worked with litter pickers and beach cleaners from Surfers Against Sewage.

Simon Palmer, who works for the environmental charity, says: 'On an average beach clean we can pick up maybe slightly more than half a ton, which is indicative of a problem. In some cases plastic bottles can take 500 years to break down.  So if you imagine in Henry VIII’s time, if he had a couple of plastic bottles they would still be around today.'

Izak adds: 'I would like the viewers of my film to come away from watching it with a more open mind towards doing their bit to keep beaches cleaner.

'If you are near the sea I would like people to think, 'You know what, I can pick up my rubbish and take it to a bin, it’s five minutes out of my time to go and do that'.

'A lot of people can do it when they are on their way back to their car and put it in bins in the car park.

'It is one of the major problems we are facing with pollution on our planet at the moment and no one seems to be talking about it.'