Don't Shout the Pronoun Out 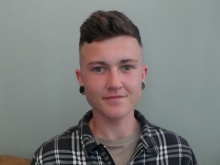 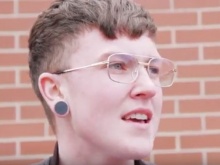 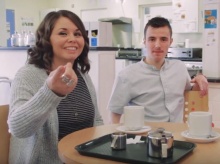 A scene from Jordan's film

A young man wants people to be more mindful of the language they use when talking to trans men and women.

Jordan Smith-Howell is keen for people to use gender netural pronouns – such as ‘they’ or ‘them’ instead of ‘he’ or ‘she’ – if they are not sure of someone’s gender.

The youth support worker from Milford Haven has made a film particularly targeted towards the older generation to get his message across.

‘If you are transgender and somebody gets your gender wrong, it can affect you deeply and ruin your whole day,’ says Jordan, 23.

‘But an individual can be saved from a lot of negative feelings if you are mindful of the pronouns you use when addressing them.’

Born a girl, Jordan says he was 16 when he realised that people can transition from one gender to another.

‘That was when I realised who I was and I understood why things about myself hadn’t always made sense when I was growing up,’ he explains.

‘I always knew I was something other than what I was and the moment I discovered you could transition it just clicked.

‘I have always liked boys’ things and any animated characters I made of myself were always male.’

Transitioning from female to male three years later, Jordan – who underwent hormone therapy - says people were supportive on the whole.

‘I started living as Jordan when the hormones kicked in and everybody could instantly see me for who I was without having to explain myself,’ he says.  ‘My close family were extremely supportive off the bat, and other people got there with a bit of time.’

Launching his Fixers film at a local youth centre, Jordan says he hopes it will help other trans people to avoid hurtful situations.

‘Before I got to the stage where people identified me as male straight away, every moment was a constant battle.  I would avoid a lot of situations I had no reason to avoid, and I don’t think anybody should have to deal with that because of a pronoun.

‘I’m keen to help others avoid going through the embarrassment that I experienced.  Everybody deserves respect in regards to who they are.’

As well as sharing his film on social media, Jordan is also hoping to show his film in old people’s homes.

‘The younger generation is definitely more accepting of trans people because they tend to be more educated on the subject,’ he adds.

‘A lot of older people – but not all of them - struggle with the concept of transgender. Many of them initially won’t use the correct pronouns and dismiss them altogether, so I’m really keen to show them my film and hopefully help them to understand that it’s okay to not accept something but you can still be considerate of a person’s feelings in the process.’

Jordan's project was supported by the Wellcome Trust.