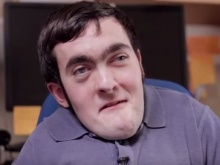 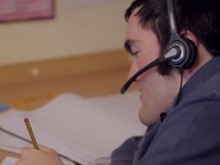 Raymond works as an administrator at Norman Industries 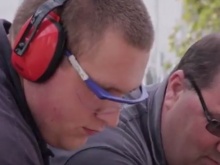 A young man who felt frustrated after over a year of struggling to find a job is urging employers to look beyond disabilities.

Raymond Lillycrop and his group from Pembrokeshire have experienced difficulties getting into work, and have made a film with Fixers to show that they are still employable despite their disabilities.

Raymond, who has a short right limb, says: 'We want to ask employers to give us a chance and an opportunity to show what we are capable of.

'People with disabilities are no different to anyone else.'

Raymond, 21, had problems getting a job after leaving education and spent more than a year looking for work.

'I sent off loads of applications, sometimes I would get feedback but it wouldn't be a very good response, they'd just tell me my application hadn't gone through. Most times I wouldn't get any feedback at all.

'I felt frustrated. I wasn't getting anywhere of having any luck at all.'

He began working as an administrator at Norman Industries - a furniture manufacturer which provides sheltered employment for people with disabilities - two years ago.

'What I like about the job is being able to use computers. I take care of annual leave for other employees and do general admin tasks,' he says.

'I've been able to gain experience and confidence.'

In the Fixers film, Raymond and his group talk about what they do and the benefits of employing them.

They plan to share it on social media and hope it will be seen by employers both locally and nationally.

'It's been really positive working with Fixers,' says Raymond.

'We want to tell future employers not to be afraid to ask us what support we need.

'We're working and other young disabled people should have the same chance.'