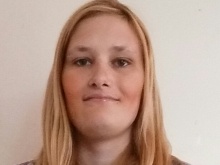 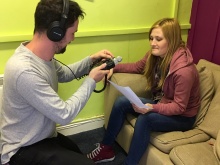 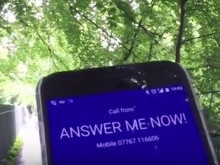 The film shows how difficult talking on the phone can be

A young woman who has battled social anxiety since she was a teenager has created a film showing the world through her eyes.

Lisa-Marie Belcher began experiencing symptoms of the disorder - which causes an overwhelming fear of social situations - when she was 14.

Now 21, she is working with Fixers to show other young people that they don't need to suffer in silence.

'I feel like sometimes people don’t realise how serious social anxiety is, and they’ll dismiss it as awkwardness or shyness,’ she says.

‘I want to show how hard it is to have it and how much it affects your life.

'It can be hard for me to go out, meet new people and interact. It’s not just about being nervous around people, it stops you from facing the world.’

Lisa-Marie says that the social anxiety affected her school and home life.

'At school I was always on my own, I didn't really have many friends and used to go and sit in the library where it was more secluded,' she says.

'None of the teachers picked up on it or really knew what was wrong - they thought it was shyness.

She plans to share her film on social media and hopes to reach out to others with social anxiety.

'I made the film with Fixers because I wanted to make a difference,' she says.

'It's helped with my social anxiety because I've been able to try new things and put myself into situations I wouldn't normally be in and work with new people.

'I've been able to be open about my social anxiety and I can talk about it now, whereas before I'd never really speak about it.'

Lisa-Marie, who lives in Jaywick, noticed a positive change after receiving counselling and getting support from InclusiveVentures – an organisation which works with vulnerable young people.

'I started getting counselling about six months ago and it's helped having someone to talk to on a regular basis,' she says.

'I've been taking little steps forward and I use things like drawing as a creative outlet which helps me. Now I can talk on the phone to people, which I couldn't before.

‘I want to show other people how hard it is to have social anxiety, and I want to send a message to those who have it that they are not alone and there is support for them if they want it.

'You're not the only one going through this and you don't have to suffer in silence.'

This project has been supported by the Essex Community Foundation.