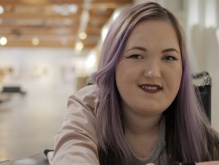 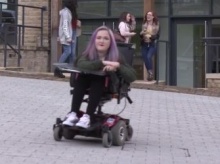 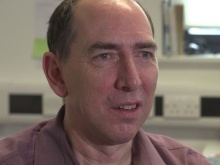 Paul Anderson from Equality Together supports the campaign

'I'd love for people to just see me as myself and get to know me, before they get to know my disability and my wheelchair.

'It's definitely challenging to be seen as a normal, everyday young girl. I don't want to be 'the girl in the wheelchair', I just want to be me.'

19-year-old Kat Pemberton is working with Fixers to break down stereotypes surrounding people with disabilities.

The charity arranged for her to tell her story on ITV News Calendar on June 8.

She has been working with the creative resources team at Fixers to make a film.

'I've created a film about some of the things that have happened to me way too often, and really shouldn't,' says Kat.

'Some comments drive me insane, like 'I bet you never get tired', 'I bet you get special treatment' or 'we need to find you a wheelchair boyfriend'.

'I don’t think people mean to be offensive or inappropriate; I just think they often don’t think about their actions or what they’re saying.'

Kat's campaign is supported by Paul Anderson from user-led organisation Equality Together.

'I think sometimes people do see disabled people as different, but we’re not,' he says.

'It’s important people recognise disabled people for who they are and also that they treat them with respect and dignity.

'I think it’s very important to make people think about what they’re saying.'

Kat adds: 'If my film made any sort of a difference I’d be really happy. Other people are growing up now with disabilities and hopefully they won’t have to deal with the same attitudes that I’ve had to.

'It would be good to see other people become more accepting.'