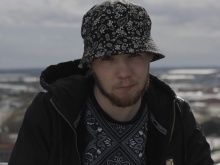 Aidan Furlong raps about death anxiety in his Fixers film 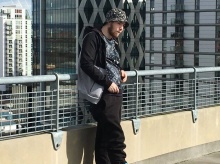 Aidan hopes to share his film on social media 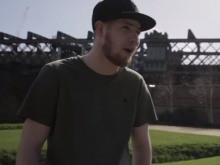 A young man who is so afraid of dying that he has spent months at a time indoors and made hundreds of trips to hospital is sharing his story in the hope of helping others.

Aidan Furlong, 23, suffers from death anxiety – a persistent fear of your own death – which causes him to experience frequent panic attacks and heart palpitations.

He has created a powerful music video with Fixers during which he raps about how the illness makes him feel and the loss he has experienced.

Aidan, who lives in Manchester, developed the debilitating mental health condition after his aunt, cousin and close friend all died in 2014.

‘It was the worst year of my life,’ he says.

Aidan's aunt, Stephanie Furlong, died in January at the age of 33 after a cyst on her spine caused an infection.

His 17-year-old cousin Jordan Brennan passed away in October after receiving a blow to the head during an altercation.

In November, his 20-year-old friend Dale 'Deezy' Gordon was killed - a murder which police are still investigating.

‘I didn’t have any space to grieve – I’d be mourning the loss of one person and then someone else would pass away,' says Aidan.

‘Losing so many people broke me completely.

He began suffering from panic attacks as he struggled to cope with the loss.

'I have frequent panic attacks. Any time I have a headache, or a bit of blood in my mouth, I’m convinced that I’m dying and I keep thinking that I have cancer.

'I’ve lost count of the number of times I’ve been to hospital – it’s in the triple digits now.'

Aidan is now receiving talking therapy and is part of an online anxiety support group.

He says that his Fixers film has helped him talk about his emotions.

‘Music and writing help me to get my emotions out and talk about how I’m feeling, which I’ve always struggled with,' he says.

He plans to share the film on social media.

‘I want to show the film to young people like myself, because there’s a lot of people out there who struggle with anxiety but don’t say anything about it, who will be feeling how I did a few years ago when I was ashamed and embarrassed.

‘No matter how hard things are, just remember that you are not alone. Anxiety doesn’t mean you’re weak. There are people out there that can relate. Only time can heal you, and it will.’

Aidan's project was supported by the Wellcome Trust