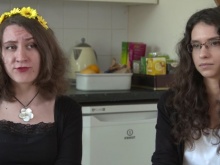 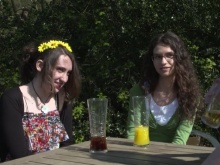 The pair say you can have fun without drinking alcohol 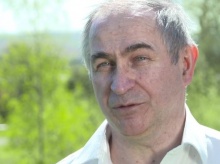 Dr John Foster from the University of Greenwich supports the campaign

'When I first got to university the main focus was on drinking. All the activities for fresher’s week were about drinking and for me, who didn’t drink, that was very frightening. I felt I wouldn’t belong and I didn’t have a way of fitting in without drinking.'

As two non-drinkers Lauren Seward, 21, and Marta Klimkowicz, 22, were concerned about not fitting in when they started university.

All the media and information they had seen or read about university life suggested a culture centred on drinking.

However both were pleasantly surprised to discover they were not alone in electing to be tee-total.

Their story was broadcast on ITV Meridian East on May 4.

Lauren and Marta were relieved to find that their chosen university – University of Kent – already had a society in place called Are You Not Drinking Much? that catered for other students who felt the same as them, which they now run.

With the help of Fixers, Marta and Lauren want to let other students who want to remain sober during their studies know that they are not alone and will still be able to enjoy a rich and active social life at university.

Lauren shared the reasoning behind the society.

'The idea for the society is to provide a social life for people who don’t drink. It would really have helped me to know about something like this before I went to university, to know that this life style was possible,' she says.

Explaining the importance of the society, Marta adds: 'It is needed because there are more people who share this idea but it's just hard to meet them.

'When you first get to university it feels like all activities are centred around drinking, so it’s just a way of connecting with this particular group of people you wouldn’t be able to meet otherwise.'

He says: 'Overall drinking in young people is falling, but student culture is still very heavily centred around drinking to get drunk, and often it can lead to mental health problems.

'We do know there’s a lot more mental health problems in universities now and possibly masking of them, because one way of masking them is getting intoxicated so maybe it won’t get recognised.

Both girls share the same goal with their film – to reassure other young people that they don’t have to get drunk to have a good time.

Lauren concludes: 'I think it’s really good to spread this message as someone who was afraid of university and this feeling of not fitting in I really want to make sure everyone knows they can do something like this and it can be great.'