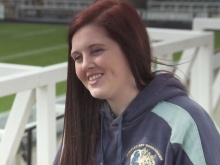 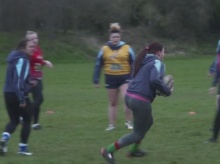 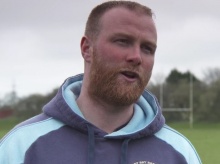 'I feel amazing when I’m out there playing; the adrenaline rush you get is just incredible. Other women are definitely missing out on rugby. Anybody who thinks it’s just a man’s game should come and watch some of the female rugby games - they’d realise that it’s really not just a male sport.'

Shannon Johnson plays rugby with the Whitley Bay Barbarians and says that the sport has had a significant impact on her life.

The 18-year-old, from Seaton Delaval in Northumberland, is working with Fixers to eliminate the stigma around women's rugby and encourage other girls to take up the sport.

The charity arranged for her to tell her story on ITV News Tyne Tees on April 11.

She says: 'I started playing rugby in high school and it's definitely had a really significant effect on my life.

'I was bullied for quite a lot of my school career, and then when I took up rugby I got a lot more confidence and the bullying stopped.'

Shannon hopes her campaign will challenge stereotypical ideas of the sport.

'Female rugby definitely requires the same level of commitment, physical aspects and technical aspects as the men’s sport,' she says.

'I would like to get the message across to women and girls that rugby isn’t just a man’s sport and no matter how much stigma is behind it, you can do it.'

Lee Carbutt, who is the coach at the Whitley Bay Barbarians RLFC Women and Girls’ Section, supports Shannon's campaign.

He says: 'I set up the Whitley Bay Barbarians women and girls rugby team, we’re the only girls’ rugby league club within the north east of England.

'It was established about six years ago with six girls and we now have around 120 registered players.

'It’s definitely full on, it’s exactly the same as the men’s game, so if you’ve never seen women’s rugby come along and watch a game.'

Shannon adds: 'I hope that one day women’s and men’s rugby will be at the same level and seen as equal.

'I will feel really proud if I am able to make a difference towards women’s rugby and encourage more people to take it up and for the stigma behind it to fade.'

Shannon's project was supported by the Wellcome Trust.