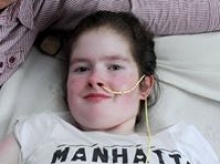 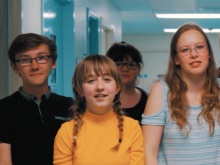 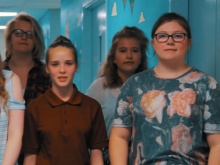 An inspirational teenager who teamed up with a group of young hospital patients to call for better transition from child to adult services, is helping to get their message heard – four months after she sadly passed away.

Caitlin Ronan, 17, suffered from a progressive illness which robbed her of movement and left her bedbound and in need of round-the-clock care for the last four years of her life.

Yet her sunny disposition in the face of such adversity and determination to help others has become her lasting legacy.

Before she died, Caitlin joined a team of Fixers – all young patients at Hereford Hospital – to make a film to help NHS directors and staff understand how young patients feel about ‘transition’, the process of moving from children’s to adult’s health care services, which usually happens between 16 and 18.

‘Caitlin grabbed every bit of life she possibly could,’ says her mum Louise Ronan, from Ledbury. ‘She was incredibly brave and determined despite being dependent on other people for everything. She was halfway through the transition process and was worried about the prospect of going onto an adult ward. All the consultants and nurses she knew were changing.’

The film – which has been dedicated to Caitlin by her Fixers’ team - stresses the importance of NHS managers taking young patients’ opinions and individual needs into consideration throughout the transition process.

Caitlin had progressive CIDP (Chronic Inflammatory Demyelinating Polyneuropathy), which meant that she gradually lost all movement from the neck downwards, was in tremendous pain and had severe breathing difficulties.

But despite this she was keen to become a Fixer to raise awareness about how the transition process can cause anxiety for young people.

‘It was so important to Caitlin that she was listened to,’ says her mum. ‘She felt she was making a difference and wanted people at the hospital to hear the group’s message.’

The film had not yet been released when Caitlin died unexpectedly on November 17, 2016 following a bad chest infection.

It was launched on March 20, 2017 at The County Hospital in Hereford to an audience of NHS professionals and special guests.

Fellow Fixer Jay Smith from Hereford, 16, says: ‘Caitlin was so passionate about the subject of transition and was willing to do whatever it took to change things. I feel lucky to have found out that a person like her even existed.

‘For me personally, I haven’t started the transition process yet, and I feel very cautious about it.’

Another group member, Alice Jones, also from Hereford, 13, added: ‘The subject is important to me because I know that I will have to go through transition one day and I want people to have a good experience.’

Despite her illness, Caitlin was determined to be a normal teenager.  She loved talking to her friends on the Internet, acting, singing, and in particular musical theatre.

She had recently completed three AS Levels with good grades, sitting her exams in bed with the use of a scribe.