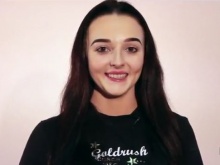 Megan wants cheerleading to be taught in schools 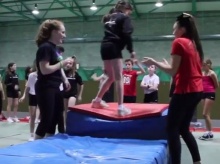 Megan is the head coach at Goldrush Cheerleading 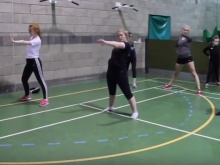 A cheerleader is campaigning with Fixers for the sport to be added to the school curriculum after gaining valuable skills such as team work and confidence.

Megan O’Kane, 23, first discovered the sport when she was studying dance at university.

She is now the head coach at Goldrush Cheerleading and says that she has seen a number of benefits for those taking part.

With Fixers, she has made a film showing what she loves about cheerleading.

Megan, from  from Swatragh in Co Londonderry, says: ‘It’s good for people’s confidence, socialisation and physical health and I find that it often appeals to people who wouldn’t normally be drawn to traditional forms of Physical Education (PE).

‘The cheerleading team I’m part of draws its members from all across Mid-Ulster, ranging from a 10-year-old boy to a mum in her twenties.’

She adds: ‘It’s inclusive – men, women, boys and girls work together rather than being divided.

‘They’re learning how to work as a team, and they’re also developing better coordination and spatial awareness.’

Watch Megan's film at the top of the page.

Megan thinks that students would benefit from being taught cheerleading in schools.

‘If it was introduced into the curriculum it would be amazing,’ she says.

‘I feel like people can feel a bit forced into PE – it’s a subject that can be very tricky, especially for young girls.

‘If cheerleading was brought into the curriculum I think that a lot of young people would feel more comfortable getting involved and would work together as a team.’

The film was launched at Magherafelt High School in Ulster.

Geoff Burns, head of PE at the school, attended the event and says: ‘Megan is such a good ambassador for the sport. She is highly motivated and I agree with the sentiments expressed in the film.

‘In trying to engage pupils who would not normally be involved in sport it offers an outlet away from team games.

‘I wish Megan every success in trying to change how cheerleading is viewed in a wider educational context.’