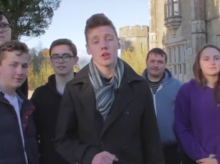 A group of young people with Asperger’s Syndrome have joined forces to create a short film with Fixers informing people about the condition.

The youngsters, who are all from Northern Ireland, share common issues such as problems socialising with others.

Asperger’s is characterised by significant difficulties in non-verbal communication and social interaction.

Shane Donaghy, 17, from Cappagh, Co Tyrone, says: ‘I find it difficult to socialise and make friends. I was bullied at school. I spent a lot of time on my own and that made me an easy target.

‘I think more needs to be done so that people understand Asperger’s and I think the film does that really well.’

Richard Collins, 15, from Cookstown, has also has problems interacting with others.

He says: ‘I have sensory issues with light and sound and l suffer from anxiety issues on a daily basis, so every day is difficult.

‘l have to overcome so much within myself before even engaging with the rest of the world.

‘Because of my Asperger’s I’ve been viewed as weird and stupid - I’m neither.

‘I just have a condition that makes me relate and react to things in ways that others don’t understand.

‘Greater awareness, better understanding, and more acceptance of people with Asperger’s is vital. I hope our peers and teachers will learn from our Fixers campaign.’

Jane Dunseath, 14, from Cookstown, is studying Child Care and explains that it is important for teachers to be patient with students who have Asperger’s.

She says: ‘I find it hard to work on my own and need help and support in class. I also find it difficult to relate in group situations.

‘Fortunately I have an amazing teacher who understands that I need time and support to get through things, but the ultimately, I can do it.

‘She knows that just because I may need time or help to complete a task it doesn’t make me stupid, and that one day I’ll make a good carer.

‘I hope that this film will remind teachers to make sure that pupils get the time and support they need to complete the work they are set.’

The group plan to share the film in schools and colleges.

The film was launched at The Courtyard Restaurant in Cookstown, at an event attended by around 70 people.

One audience member said: 'As a young person who has Asperger's Syndrome, I thought the film was really good. It puts across the reality of life with Asperger's really well and I hope loads of teachers get to see it and learn from what it says.'