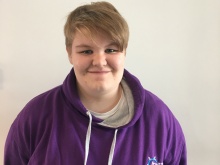 A group of young people from Lancashire have made a film with Fixers showing what it’s like living with a disability and facing discrimination.

They want to educate people about disabilities and hope that their film will challenge stereotypes.

The film shows different scenarios in schools and the workplace where the young people have been discriminated against.

Emma Riley, who lives in Chorley, says: ‘I was diagnosed with autism and ADHD when I was around seven.

'Primary school was difficult – teachers didn’t really understand why I was behaving the way I was and would just tell me to be quiet or move me out of class as soon as possible without asking me what was wrong. One said I was ‘unteachable’ and that really hurt.

‘I would get very distracted in lessons if there was too much noise. I would get frustrated and start shouting and then get kicked out.’

The 19-year-old, who is now studying education at the University of Central Lancashire, adds: ‘Some young people in the group have been bullied.

'People have picked on them -  saying nasty words, hurting them and texting them horrible things. Others have struggled to find jobs.

‘A lack of understanding causes people with disabilities to be discriminated against because they’re different.

'We hope that people watch our film and see what it’s like for us and make changes. We want to get rid of discrimination and stigma.’

The film was launched at a SEND Together workshop in Lancashire, which was attended by 45 people.

The event brings together young people with special educational needs and disabilities, their parents, carers and people who deliver services to them.

One person said: ‘This is such a powerful film, it’s really thought provoking.’

Mariam Ahmed, young person’s coordinator at Fixers, said the film was shown to the Children's Commissioner for England, Anne Longfield OBE, and the charity Barnados, who praised it.

'They will be using the film to raise awareness on the issue at various events and meetings they go to, with schools, colleges, councils and government,' she said.

‘The development in Emma’s self-esteem has been amazing. She has been able to get other young people involved in discussions and has been the spokesperson of the group.’