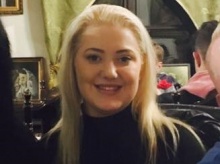 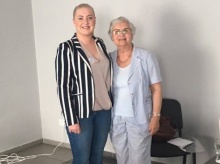 A student who has met a Holocaust survivor and is outraged by websites which deny the genocide ever happened, has created a film telling people not to believe everything they read on the internet.

Jess Oman studies history at Teesside University and is writing her dissertation on the Holocaust – a genocide led by Adolf Hitler in Nazi Germany which killed millions of Jewish people.

The 20-year-old has made a film with Fixers and a group of her fellow students to encourage people to do their own research instead of believing everything they see online.

The film explores how information can be manipulated by the media, and how what you read on various newsfeeds might not always be accurate.

Jess found a number of websites claiming that the Holocaust never happened when she was doing research for her degree, and it inspired her to start the campaign.

Recently the student was in Krakov, Poland, where she interviewed Holocaust survivor Lydia Maksymowicz.

She says: ‘It really angered me, I just thought it was so disrespectful.

'Lydia was taken to Auschwitz when she was just three-years-old and separated from her mother.

'She became a test subject for Dr Josef Mengele, an SS officer who performed experiments on prisoners.

‘People like Lydia have lived through that experience and been brave enough to share their stories – it’s just unbelievable that someone who didn’t even go through it would go online and write that it never happened.'

The film explains how detrimental it can be to believe everything you see on the internet – for example through social media outlets – ignoring any sources, facts or statistics.

Jess, who lives in Stockton-on-Tees, believes young people can be deceived by the media and so she plans to share the film on social media and in schools to encourage students to think twice.

She says: ‘Some people who don’t study certain subjects and don’t fully understand them can just go with what the media tells them rather than doing their own research.

‘If people can deny that the Holocaust happened when we have a generation that lived through it, then other things that happen - like the migrant crisis - can end up being misrepresented.

‘We want people to weigh up the sources and the legitimacy of what they’re reading.’