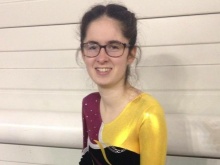 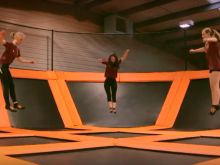 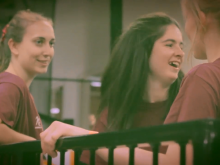 A young woman from Northampton, who's an enthusiastic trampolinist despite having only one lung, is urging other young people with health challenges to lead a full and active life.

Katy Baker has scimitar syndrome, a rare heart condition that affects lung development, and which can cause her to become easily fatigued and breathless.

The 19-year-old has produced a film with Fixers, which shows that having an illness doesn’t have to hold people back from doing the things they love.

‘Every year at secondary school, I dreaded when the cross-country came around,’ she says.

‘I found it extremely difficult and always came in the last 10 places. I didn’t do it because I had to, but because I wanted to show that I could.

'Hopefully my film, which I want shown in local gymnasiums, can inspire others to believe in themselves and never think they can't do something.'

Katy is currently studying Childhood and Youth at Northampton University, where she is also a member of the trampoline team.

She says the sport gives her the motivation to push herself and overcome personal obstacles.

‘Trampolining is not easy with my condition because I can feel breathless and dizzy, but I really enjoy it.

‘It has helped me grow in confidence and realise that if in your heart, you want to achieve something, you should just go for it and not let your illness be a barrier.

‘Even though I still have hospital appointments and check-ups, I feel like the sport is something for me to show that I can be like everyone else and have a go.’