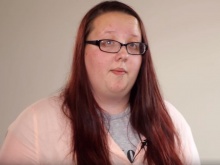 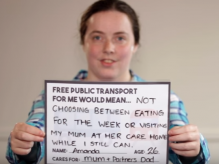 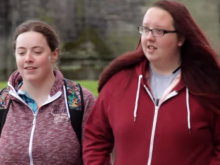 Jade and Amanda appear in the film

A woman who has looked after her dad since the age of five is campaigning for young carers to be entitled to free travel on public transport.

Jade Lochhead, 21, has struggled to pay for transport - at one point relying on food banks while she waited for financial support.

She started the campaign with her partner – 26-year-old Amanda Macdonald – and a group of young carers.

With Fixers they have created a film sharing their experiences.

Jade, from Paisley, Renfrewshire, says: ‘We use public transport almost every day. The cost is really high and that’s a big ask for carers, who often face poverty and isolation.’

Jade and Amanda travel to a young carer’s centre – a 45 minute bus journey away – three times a week.

They also use public transport to take Jade’s dad to hospital appointments, supermarkets and pharmacies to pick up prescriptions.

While her dad is entitled to a free bus pass, Jade is not, and around a third of her weekly carer’s allowance is spent on travel.

‘It costs £4 for a bus journey and I’m usually out five days a week.’

Jade found paying for travel difficult during college – when she was no longer entitled to her carer’s allowance and had to seek other financial support.

‘There was a delay in getting a bursary, so for four months I had to borrow money from family members to get to college,’ she says.

‘It was stressful and resulted in me missing a few days and not attending some classes, which put added pressure on me.

‘I live with Amanda, who was caring for her mum at the time. We relied on a crisis grant to pay for gas, electricity and travel before I received my bursary.

‘There were times when we had to choose between eating a meal and travel and we ended up relying on food banks.’

Amanda cared for her mum after she was diagnosed with early onset dementia ten years ago.

She says: ‘I faced difficulties trying to find enough money to visit my mum in hospital or the care home she was in after she became too ill to stay at home.

‘I quite often found myself not eating properly some days just so I had enough money to visit my mum.’

Jade adds: ‘If young carers were given free public transport it would give them a better quality of life and allow them to see friends, socialise and access services like a young carers’ centre.

‘It would be one less thing to feel stressed about.’