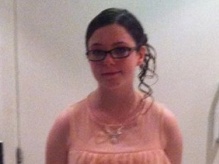 Relatives who look after a loved one with an alcohol or drug addiction could be classed as carers, says a teenager from Fife.

Charlie Bowie, 17, wants to spread the message that support isn’t just available for people who care for relatives with disabilities.

With Fixers, Charlie and a group of young carers have created an animation, which they plan to share in schools and colleges.

Charlie has cared for her mum - 40-year-old Debbie McGowan - since the age of 11.

Although her mum does not have substance abuse issues, Charlie says there are youngsters who are caring for parents with addictions who do not realise they qualify for support.

She says: ‘When people think of carers, they often think that they support people with disabilities, but that’s not always the case.

‘I go to a young carer’s group once a month, I have one-to-one meetings every two weeks and I attend a focus group.

‘That’s where I found out that there was quite a big gap in terms of support – and that family members of people with substance abuse issues aren’t always getting the help they need.

‘I want to draw attention to a less typical type of carer and encourage people to come forward and talk about what they’re going through.’

A report from the Scottish Government has shown there are an estimated 100,000 young carers in Scotland – but only 3,500 are supported by dedicated young carers’ services.

Accessing support has been invaluable for Charlie, who became her mum’s carer when she fell and fractured her back.

The accident triggered fibromyalgia, which causes pain all over the body.

Charlie, who studies at Woodmill High School, says: ‘It triggered the symptoms, but for a while nobody really knew what was wrong.

‘We tried to keep her up to her normal standard of living, but it got really difficult.

‘At first I really felt the pressure of being a carer, but it’s been fine because I have such good support.

‘Some people are scared to ask for help because they don’t know what the outcome is going to be, but we want to show people that something positive can be gained in asking for support.’