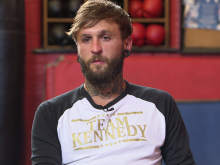 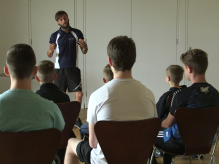 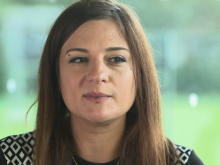 'If I didn't have boxing I'd probably still be working as a potwash, and that's not a career I wanted. I realised too late how important education was - now I want to encourage young people to do as well as they can in school.'

A professional boxer is encouraging young people to 'learn from his mistakes' and work hard to get a good education.

Josh Kennedy, 25, struggled at school and was excluded a number of times before he was eventually expelled.

His story was broadcast on ITV Meridian East on September 8.

He says: 'I didn't take too well to being told what to do and I had a problem with authority.

'I was struggling academically and thought - what's the point? I'm on a slippery slope so let's get to the bottom of it.'

He says he later realised he had made a mistake.

'I was doing jobs that I didn't enjoy because I didn't have the qualifications to do the ones I wanted to.

'It hit me when I was cleaning up pots one day that I should have paid attention in school. I didn't want to work for minimum wage cleaning someone else's plates.'

Josh later discovered a passion for boxing, and has gone on to achieve success in the sport.

As an amateur he had 79 fights and won 60 of them, and he has so far won all seven of the professional fights he has taken on.

Now Josh, from Folkestone, gives motivational talks to young people - sharing his story with them and encouraging them to find something they are passionate about.

He says: 'I honestly believe that with education comes a better future. The qualifications you get in school will set you up for the rest of your life.'

Ali Skinner, engagement officer at mentoring charity CXK, says: 'It’s so important for young people to get qualifications while they’re at school.

'Someone like Josh giving that message as a peer and as another young person who struggled is very positive for them.'