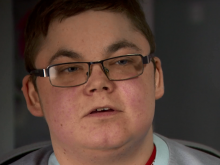 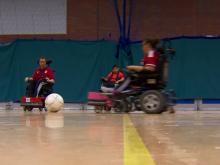 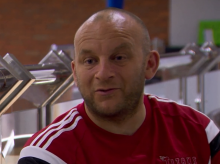 ‘I couldn’t join in on sports days at school, and there was the usual cliché of being picked last for teams and always losing the races. I never thought I’d be able to be part of a sports team – let alone play a fast-paced sport like football.’

Confined to a wheelchair, and unable to complete even the simplest of everyday tasks without help, Ryan Dack wants others with profound disabilities to realise that playing sport is still an option – and one that can change a life.

With Fixers he has made a film which was broadcast on ITV News Tyne Tees earlier this month.

The 23-year-old from Middlesbrough – who has Duchenne Muscular Dystrophy - tells ITV how he discovered powerchair football – a sport played in a specially designed motor-powered wheelchair.

He says: ‘I was a bit apprehensive at first, but I eventually went to give it a go and I loved it and haven’t looked back since.

‘Now I’m part of the team I’ve got to know lots of amazing people who I’ll be friends with forever.

‘I think powerchair football has changed my life.  It’s made me come out of my shell and be a lot more outgoing and just have a lot more confidence in myself.

‘Scoring a goal is one of the best feelings ever.  I do think that sport should be open to anyone no matter what their physical ability.’

Ryan and his team have produced a Fixers poster campaign to educate people about powerchair football and its benefits. 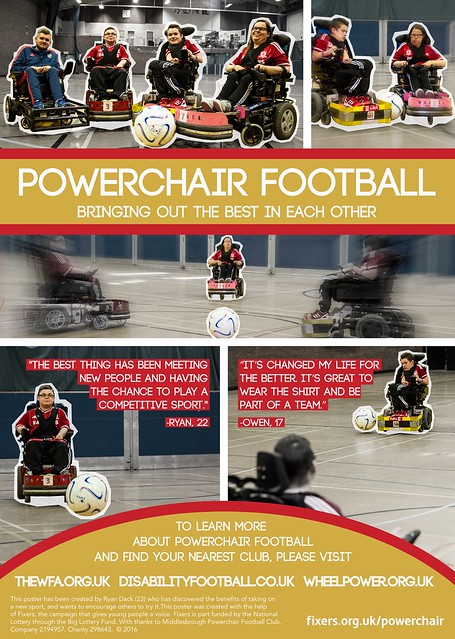 Ryan explains why the relatively new game of powerchair football is such a game changer in the world of disability sport.

He says: ‘What I love about powerchair football is the fact that it’s such an inclusive sport because people with the most severe disabilities physically can still give it a go.

‘I want people with profound disabilities to realise that sports still is an option, so even if you can just move one finger, it’s still possible to play.

‘I care about the project because I was in the same shoes as many other people are. I do hope that when people see my story that it will make a difference to them – and that they’ll get the same out of sport that I did.’

Former Paralympian Lee Fawcett is supporting Ryan’s campaign. He represented Great Britain in both wheelchair basketball and fencing – having been left paralysed after an operation at the age of 15.

He says: ‘I really felt I’d never ever do sport again. I thought I’d be never good enough – “people in wheelchairs can’t play sports” - these are the things that were going through my mind at the time.

But Lee did start playing again when he discovered wheelchair basketball. He agrees with Ryan that the opportunities for disability sport are out there, and come with huge benefits.

He says: ‘Obviously with my sport, wheelchair basketball, you need to use your arms and stuff like that. But there’s a sport for all different types of disability.

‘I would always say try loads of different sports and pick your favourite at the end.

‘For me sport is rehabilitation - the social aspect of being in a club or a team sport builds self-esteem.’