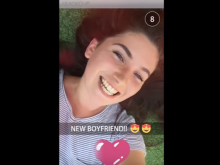 A scene from the film shows how all seemed normal at first. (Played by an actress) 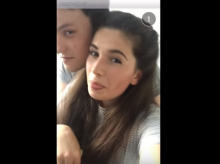 The teen records the relationship in a Snapchat style video.

The videos show the relationship deteriorating.

‘He started to control every part of my life - financially, physically, emotionally and sexually. He made me believe that my own family and friends were against me and that he was rescuing me from them.’

A young woman, who was abused by an older boyfriend for nearly three years, has launched a campaign wtih Fixers to warn teenagers about the signs of an unhealthy and abusive relationship.

The 19-year-old, from Cornwall, feels the education system is failing to equip young people to judge whether a relationship is right or wrong.

She spoke to ITV News West Country about her Fixers campaign on August 8th.

Jackie, whose real name has not been used, was 16 when she met a man online who was then 25.

She says: ‘To start off with there wasn't anything that struck me as weird or not right. But things went downhill very quickly when I moved in with him.

‘He started to control every part of my life - financially, physically, emotionally and sexually.’

Jackie was forced to drop out of college when her boyfriend insisted on keeping constant tabs on her.

She says: ‘He’d lock me in the house and he'd control what I ate and when I ate it.

‘He would randomly turn off the shower when I was in there to humiliate me and to show he's got complete control over me.'

The abuse escalated and Jackie was raped. She reported the incident to the police, but they dropped the case citing a lack of evidence.

With Fixers, Jackie has made a powerful film in which she is played by an actress, showing a series of Snapchat style videos as a relationship descends into abuse.

Watch the film below:

Jackie, who wants the film to be shown in schools and colleges, says: ‘The aim of this Fixers project is to help young people spot the signs of an unhealthy relationship.

‘My ex made me believe that my own family and friends were against me and that he was rescuing me from them.

‘He took away every bit of my personality until there was nothing left.’

Jackie finally escaped the relationship when her boyfriend was given a restraining order and she moved back in with her parents.

He says: ‘Our officers are specifically trained to come and help. We’ll find a way to speak to you so the abusive person won’t find out, and the most important thing we can do then is remove you from that situation and keep you safe.’