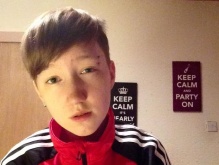 Rebekka was born a girl but sometimes identifies as a boy 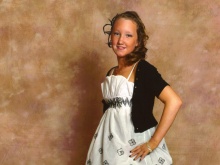 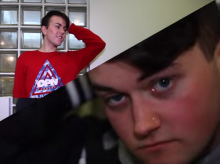 Friends from the LGBT community contributed to the film

A teenager who leads a unique double life as both a girl and a boy wants to encourage people to be more tolerant after she was bullied about her sexuality.

Rebekka Howie, from Paisley, Scotland, is gender-fluid, a term used for people who identify with both genders.

Some days the 17-year-old wakes up a girl and wears make-up and a dress, and other days she wakes up a boy and wears a baseball cap and baggy jeans.

She says: ‘I just wake up and know which gender I want to be. It’s a feeling that’s hard to explain.

‘Sometimes the thought of wearing a skirt is really unappealing and then other days, it’s what I feel most comfortable in.’

Rebekka’s friends never know from one day to the next who she will turn up to college as.

She says: ‘Sometimes it will be a bit of a shock for friends when they see me in a dress, heels and wearing make-up.

‘My mates are all very supportive. They know that deep down I’m the same person.’

But not everyone has accepted Rebekka’s sexuality.

When she came out as a lesbian, she was bullied at school.

She says: ‘I had my head flushed down the toilet, I was thrown in the bin, I was hit in the face…it was horrible.’

The bullying ended when Rebekka left school to attend West College Scotland where she is studying healthcare.

She says: ‘I don’t think anyone should be persecuted because of their sexuality.’

After Rebekka was bullied for being gay, she decided to team up with Fixers and some friends from the LGBT community to make a film calling for society to be more tolerant of different sexualities.

Go to the top of this page to watch the Fixers film.

She says: ‘I don’t want anyone to have to go through what I went through.

‘I want people to know that it’s okay to be gay, trans, or gender fluid, as long as you’re happy.

‘Don’t be the person who still doesn’t accept that we’re all the same, no matter our sexuality.’

Rebekka's project was supported by the Wellcome Trust.