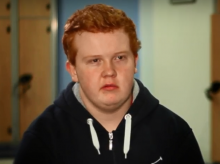 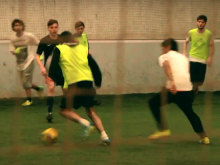 The group demonstrate teamwork on the pitch 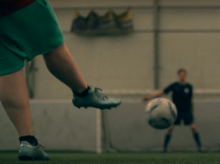 A college dropout from Dundee has told how playing football scored him a job.

Eighteen-year-old Conor Hawman says volunteering with Street Soccer Scotland, an organisation which provides opportunities in poverty-stricken areas through sport, gave him the skills to land him work.

He says:  ‘I had no real purpose in life and was just hanging around with my mates. That was until I found sport.

‘At first I would just go along for the football, but after while I found that I was really developing as a person and learning new things about myself.

‘The staff managed to get me some work experience at Dundee Ice Arena, which eventually led to an opening for a steward position.

‘In the interview I used all the skills I had learned during my time volunteering, which had changed my life so much.

‘Getting the job was a massive thing for me because I was finally independent. I want people to know that sport really can help to open doors. It did for me.’

With Fixers, Conor and his team have helped to create a film to share on social media.

It features young people explaining how playing football helped them in their own lives.

He says: ‘A lot of people my age just roam around the streets because they feel there’s nothing for them to do, which can lead to bad things.

‘My own life wasn’t heading down a great path, but sport gave me a chance to turn things around.

‘I hope the campaign inspires others to explore what sport can do for them. Opportunities often lie in places you least expect.’