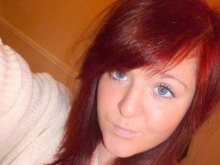 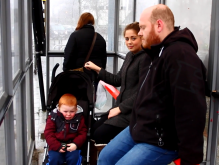 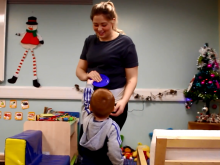 A young mum from Edinburgh has told of the shocking moment another passenger ordered her off the bus - because her baby was crying.

Jenna Imrie, who had a baby when she was 20, was on the bus when her daughter began crying.

Shockingly another passenger told her to be quiet or get off the bus.

She says: ‘She was making a bit of noise on the bus and a man behind me said “shut it up” and insisted I got off.

‘It was horrible and I felt like I was being judged by every passenger.

‘Unfortunately this is just one of many experiences when I feel I’ve faced prejudice as a young mum.’

Now 24, Jenna is working with Fixers to encourage greater respect for young mothers.

She says: ‘I would do anything for my daughter as I’m sure any mother would. Being young doesn’t make us incapable of looking after a child. We‘re just as dedicated as anyone else.’

With Fixers, Jenna and a team of young people have produced a film which follows a day in the life of Sophie- a young parent who has experienced prejudice in her community.

She says: ‘Young mums are not bad mums. That’s the message we hope people will take away from it.’

She says:‘Being a mum can be hard enough without people casting negative assumptions.

‘Hopefully our campaign will make individuals think twice and realise that young mothers are not that bad.’