Ticked Off Fix On ITV 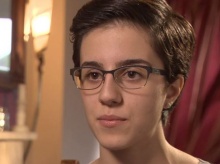 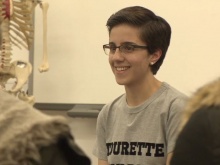 Sophia talks to a group of young people 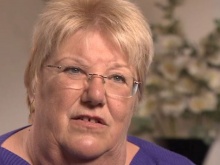 ‘The media tends to only show very extreme versions of Tourette’s and that’s quite frustrating for those of us who have less noticeable symptoms.’

Sophia Savidis-Macris wants to highlight the challenges she faces living with Tourette’s syndrome so she can tackle some of the misconceptions surrounding the condition.

The 19-year-old from Cheshunt in Hertfordshire wants to show that Tourette’s isn’t always visible and doesn’t just consist of making loud noises and swearing.

Her story was broadcast on ITV News London in January 2016.

‘Over time, my tics have decreased in frequency and severity and I have learned to suppress them if I need to,’ explains Sophia.

‘Holding in the tics is more difficult and more exhausting than letting them out.

‘When I first developed Tourette’s, I was really conscious of how I came across to other people, but I was lucky that I was surrounded by those who accepted me for who I am.’

With Fixers, Sophia hopes to give presentations in schools and colleges to encourage young people to accept and empathise with those who have Tourette’s.

She has also helped to produce a short film, which aims to dispel common misunderstandings about the condition.

It shows how Sophia dealt with her Tourette's and learned to accept that the condition was part of her life.

Watch the film by clicking below.

She has the support of Suzanne Dobson from Tourettes Action, who appears in the broadcast film.

‘We know from research that 1 in 100 school age children have Tourette’s and perhaps 50 per cent of those have it severely enough to seek a diagnosis,’ Suzanne says.

‘Only 1 in 10 people with Tourette’s have coprolalia, which is the swearing gene.

‘If I said to you don’t blink, you would find that that was the only thing you wanted to do and it would become really uncomfortable.’

Sophia adds: ‘If people could have a greater understanding of Tourette’s syndrome, it would make it a lot easier for those of us who have it.

‘We could feel like we don’t have to constantly explain ourselves.

‘If I could achieve that, then I would be really pleased.’