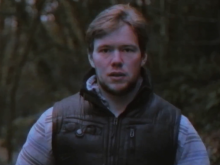 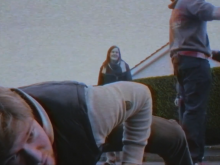 The main character is seen getting bullied in the Fixers film 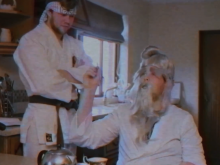 Conor Kemp is showing how martial arts can improve physical and mental well-being in the hope others will get hooked after trying it for themselves.

The 21-year-old from Larne says the discipline gave him confidence after he was shaken up by an incident with a bully three years ago.

‘It happened during a game of basketball. I accidentally hit someone on the head with the ball and they came over and started being rude and pushing me,' explains Conor.

‘I felt so small and worthless. After that day I promised myself that I would never let this happen again, which is why I got into martial arts.

‘It taught me self-defence, which actually made me a lot more confident and less afraid of the world.

‘Now I want others to get involved and feel the same way I do about martial arts.’

With Fixers, Conor has helped to produce a film to get his message across.

Loosely based on his own experiences, the satirical piece shows the main character using the life lessons a martial arts guru has taught him to stand up to bullies.

Watch Conor’s Fixers film, 'Martial Arts,' at the top of this page.

‘While it does have humour, there is a serious message underneath, which conveys how this discipline can change your life for the better.

‘Martial arts can improve your life in so many ways. I hope the film demonstrates that.’

Conor plans to share the film online and take it into local schools.

‘I want as many people as possible to see the film,’ he adds.

‘Whether you’re insecure, being bullied or just want to get fitter, martial arts may be the answer.’