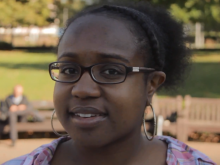 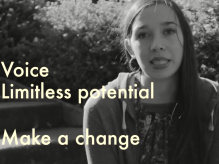 A young person in the Fixers film 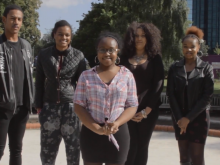 The group of young people who appear in the film

Shaniqua Benjamin wants her peers to speak up about issues they are passionate about and understand that their voices can make a difference.

The 23-year-old from Croydon is anxious that people are too quick to judge those her age and that young people’s opinions and concerns can go unnoticed.

‘I think it’s a real problem how we tend to put labels on young people and don’t see the individual underneath,’ explains Shaniqua.

‘Last year I spent some time working with a young person’s charity. Talking to those with troubled pasts really gave me an insight into the side you don’t see.

‘It showed me that if you talk to someone on a level, they will respond.

‘I think it’s important these individuals feel listened to and know that their opinions count.’

With Fixers and the rest of her team, Shaniqua has helped to produce a film which includes spoken word poetry.

In the film, a group talk about some of the issues young people face, ranging from mental health and self-harm to knife crime and unemployment.

It invites others to speak out and ‘be the change you want to see in society’.

Watch the film ‘What would you say? Youth Voices’ at the top of this page.

‘I actually cried when I saw the film. It’s beautiful,’ adds Shaniqua.

‘It’s all about using your voice to make a difference, which I think the film shows perfectly.

‘I wrote most of the poetry myself, which I was quite proud of, and the young people involved were great too.’

Shaniqua and her group plan to show their film at an event in Croydon on the evening of Monday 7th December.

They hope to give young people an opportunity to debate the issues that matter to them and discuss how to move forward.

‘I’m really looking forward to it,’ she says.

‘It’s a chance for others my age to share what is on their minds and be listened to.

'I’m hoping it will be the start of a larger movement and that we can take our message into schools and youth groups to break down barriers and inspire others.’

This Fixers project is supported by Make My Day Better.