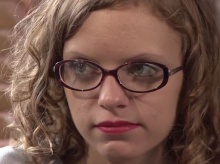 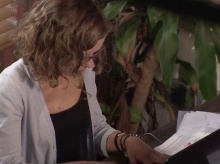 Chlo in the broadcast film 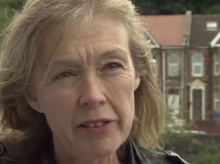 ‘He’d get really angry and scream at me on the phone calling me names and accusing me of things I hadn’t done. He would apologise but then it would happen again.’

Chlo Winfield from Bristol wants to help other young people spot the signs of an unhealthy relationship, after she endured emotional and psychological abuse.

In the TV piece, 18-year-old Chlo shares her experiences to show others how to identify when a partner is becoming abusive.

‘When we first met he was really lovely but soon things started to change,’ explains Chlo.

‘He’d tell me that girls should dress in a certain way - wearing short skirts and low cut tops - if they wanted to look pretty. But if I wore that sort of thing he’d accuse me of trying to attract other men.

‘He would threaten to kill himself and say it was my fault. I was hardly seeing my friends. I wasn’t going to school. He was the only thing that mattered to me.

‘Towards the end of the relationship he was threatening me so much in public that I went to the police and he was convicted of harassment.’

With Fixers, Chlo is planning to create a film to get her message across. She has the support of Julia Nibloe from Brook Services Bristol, who also appears in the broadcast piece.

‘I don’t think our society takes emotional abuse seriously and I think that is partly because it’s very difficult to pinpoint and understand,’ Julia comments.

‘That is why Chlo’s work is really important because she is starting to address that with young people at an early stage in their lives.’

Chlo adds: 'Looking back, I find it frightening just how much power he had over me.

'My advice to other young people would be that they shouldn’t change their behaviour for anyone.

‘If they are trying to make you into someone that you’re not – don’t put up with it.’

To see other resources on this issue, or watch more Fixers films, click on the image below.