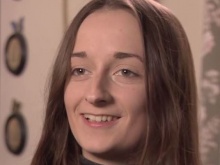 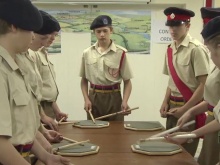 Young cadets learn to drum in the broadcast 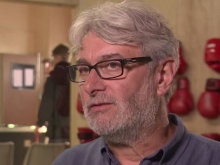 ‘When I was younger I suffered with low self-esteem and then I joined a youth organisation. It helped boost my confidence dramatically.’

Leonie Westbrook struggled to make friends at school before she decided to sign up to the cadets and combat her insecurities.

The 19-year-old from Stalham in Norfolk feels this changed her life and now wants to challenge the perception of youth organisations as ‘uncool’.

Her story was broadcast on ITV News Anglia on Thursday 8th October.

‘I’ve spoken to people about joining clubs and their responses have been that it’s geeky,’ explains Leonie.

‘I met someone who was in the Cadets and decided that I wanted to join.

'Instantly I was welcomed as part of a huge family.

‘I made friends and gained leadership skills.

'I’ve travelled to Normandy, performed in front of the French government and even been involved in giving a guard of honour for Prince Charles.

‘Youth organisations are great at keeping young people off the streets and giving them something to focus on.’

With Fixers, Leonie hopes to create a film to show others her age how much they could gain from joining a youth organisation.

He appears in the broadcast.

‘When they apply to university or for a job, people will see that they’re doing something outside of academics and that’s a huge boost.’

Leonie adds: ‘Being part of a group has really enriched my life.

‘By doing this project, I hope to encourage young people to join and have the experiences that I’ve had.

For resources on this issue, or to watch more Fixers films, click on the image below.