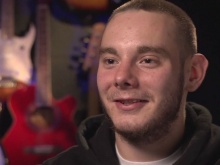 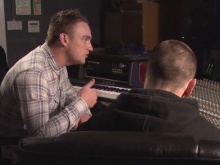 Lewis in the studio with Craig Breen (L) 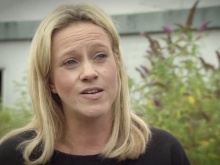 ‘I used to bottle things up. But when I started making music, I found I could be more confident, especially around large groups of people.’

Nineteen-year-old hip hop artist Lewis Lacey from Norwich wants to help others create music as a way to express themselves.

His story was broadcast on ITV News Anglia on Thursday 10th September.

In the TV piece, Lewis explains that he realised the therapeutic power of music after he worked with Craig Breen, a former marine who experienced PTSD after returning from Afghanistan.

‘I saw things over there that no-one should see in their life,’ Craig says.

‘I didn’t feel I could speak to anyone. I used music to channel my aggression and emotions.’

Lewis comments: ‘I have seen his confidence increase a lot.

'He’s a much happier person.

‘I now want to help other young people get the most out of performing.

‘Writing any type of music can be very therapeutic.’

Lindsay McHale, a music therapist, also appears in the broadcast to show her support for Lewis’ campaign.

‘There is a wealth of research that says music can help conditions as wide-ranging as autism and depression,’ she explains.

‘A young girl, who came to an open group that I was running, told me that it had saved her life.’

Lewis adds: ‘Everyone has their own story to tell and using music is a way for others to hear it.

‘If I could give one person a platform to express themselves and get things off their chest - that would be amazing.’

You can watch Lewis' TV film here at the top of this page.

Guitarist James Watson and his team also want to show young people that
music can have a positive impact on their lives. Watch their Fixers film.