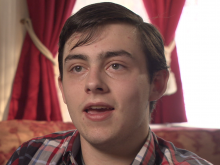 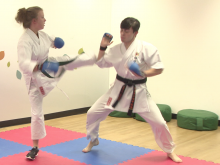 Craig demonstrates his karate skills in the broadcast 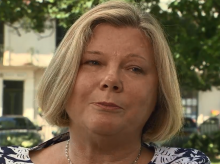 ‘I believe I’m proof that anyone can do dance, karate, or any activity in time. If you’ve got the will power to carry on and put the hours in, you can do anything you want.’

Craig Johnson (18) from Herne Bay in Kent has dyslexia and dyspraxic tendencies and wants to show others with special educational needs that they can achieve great things.

His story was broadcast on ITV News Meridian (E) on Thursday 13th August.

In the TV piece, Craig demonstrates his skills in karate and dance and explains how martial arts in particular have helped him physically and mentally.

‘It was a real struggle at school – I couldn’t do things that the other children found easy,’ Craig says.

‘I find coordinating my body really hard and reading, writing and spelling difficult.

‘I’m a black belt in karate now and it’s made my life.

‘Getting to that rank was a huge challenge, especially for someone who’s got dyspraxic tendencies.

‘My Fixers project is about helping people with special educational needs to realise that they can achieve in life.’

Jacqueline Mitchell, Lecturer in Dyslexia and Dyspraxia at Canterbury College, also appears in the broadcast film in support of Craig’s campaign.

‘Craig’s project is not just going to help him build his self-esteem and move forward in his own life, it’s also going to inspire others,’ she comments.

‘He can reach out and mentor other people with special educational needs, who perhaps haven’t been supported as they might be in school.’

Craig adds: ‘What I want for my Fixers project is for young people to realise that having a special educational need is nothing to be ashamed of.

‘I want them to know that they haven’t got a problem. It’s just their brain works differently to other people.’

You can watch Craig's TV film here at the top of this page.

Harry Stott credits martial arts with helping him in his fight
with mental health issues. Watch his TV film.