Diversity In The Media 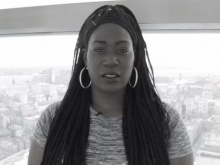 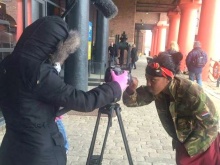 An actress on set at the Fixers film shoot 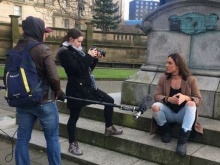 Behind the scenes at the Fixers film shoot

Campaigning for greater diversity in the media, Khadeeja Amaru wants to see change both in front of and behind the camera.

The 28-year-old* from Liverpool feels that people from a Black, Asian or minority ethnic (BAME) background aren’t currently given equal opportunities in creative industries.

‘This is something that needs to be talked about,’ explains Khadeeja.

‘We live in a mixed country and we should be showing that in our media. People should take notice and realise that things aren’t being shown as diverse.

‘I know a lot of people who want to go into acting but they’re holding themselves back because they don’t see it happening.

'In twenty years it should be easier for ethnic minorities to pursue their dreams.’

With Fixers, Khadeeja has helped create a film where actors perform a spoken word piece about diversity in the media.

Watch the film ‘Black Faces’ at the top of this page.

‘Those who want to go into drama or singing should know that we are pushing for change and they shouldn’t be discouraged.’

Khadeeja is keen to share her Fixers film on social media and hopes that media bosses will take notice of her message.

‘I want it to have an impact on the people that can actually make a difference,' she adds.

‘People should know we’re not here with a sob story. We don’t want people to feel sorry for us.

‘We’re just here to say this is how it is and it needs to change.’

Khadeeja's project was supported by the Wellcome Trust.

Also feeling that people from ethnic minority groups aren’t represented in the
TV industry, Muge wants to help increase diversity both on and off screen.