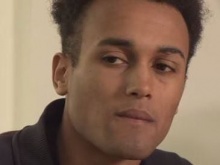 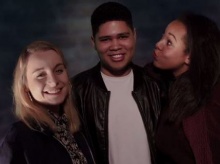 A shot from the film shows friends on a night out 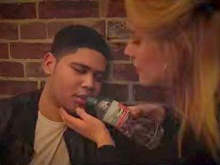 The Fixers film depicts the side effects of legal highs

Aiming to show that legal highs have lows, Curtis Miller is campaigning to expose their dangerous side-effects.

The 20-year-old from Selsey in Chichester wants young people to be taught about the risks of the substances in schools.

‘This subject is essential for our age group because it’s a hot topic,’ explains Curtis.

‘It’s about time someone stands up to show that there are things to learn about legal highs.

‘I feel like schools focus too much on just the illegal drugs and so it’s become a big issue.’

With Fixers, Curtis has helped create a film to demonstrate the negative impacts of taking legal highs.

In the film, which is in the style of a dating app, actors portray two young people who use the substances.

They’re seen ruining an evening for themselves and their friend, who struggles to control them.

Watch Curtis’ Fixers film ‘Legal Highs: AppEAL’ at the top of this page.

‘It sends a straight forward message about what the drugs can do to you,’ Curtis adds.

‘People should be aware that these drugs are made up of synthetic chemicals.

‘There are a lot of effects. People can fall into a coma, experience heart problems and some have even died.’

Curtis wants to show his film to school pupils, educating them about the dangerous stimulants.

‘I want it to be seen by teenagers so they have this knowledge within their social circle,’ he says.

‘I’d like to see it taught alongside illegal drug education.’

Curtis has also been speaking about his campaign on TV.
Watch his broadcast story.