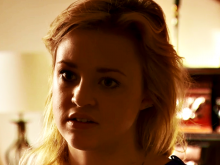 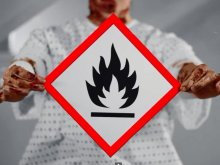 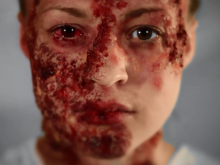 Lucy Morgan is warning of the potentially devastating consequences of playing with fire after an incident involving a bonfire left her with scars for life.

The 20-year-old from Harrogate spent four weeks in hospital after the accident, which happened when someone poured paint thinner on to the blaze, causing an explosion.

She is now using her experience to help others stay safe around flammables.

‘I don’t remember much. It was all a bit of a blur,’ explains Lucy.

‘There was a huge blast and the next minute my clothes were on fire. I remember rolling around trying to put the flames out, but my tights had actually melted on to the skin.

‘I eventually had to undergo three sets of skin graft operations, but I was lucky that it wasn’t more serious.

‘The incident has made me think differently about the smallest things, like making sure my straighteners aren’t near the hairspray and stuff like that.

‘I hope my story will strike a chord with other young people and make them take fire safety seriously.’

With Fixers, Lucy has helped create a film to drive home her message.

She features in the short piece, playing the role of a patient in a hospital burns unit, to show young people what can happen if they’re not careful around fires.

Watch Lucy’s Fixers film 'Fire Safety' at the top of this page.

‘We wanted to make it short and to the point, but visually quite striking at the same time,’ adds Lucy.

‘It was important for me to share my own experience and help educate others when it comes to staying safe.’

Lucy plans to take her film into local secondary schools to promote her campaign.

She hopes that by targeting students, she’ll teach them valuable life lessons as they get older.

‘This is the age when you’re starting to become more independent - doing things to impress your friends,’ she says.

‘Hopefully I can help keep others safe and encourage them make sensible decisions when it comes to fire safety.’

Lucy’s also been speaking about her project on TV.
Watch her broadcast film.