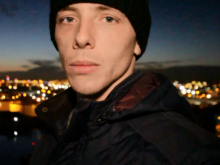 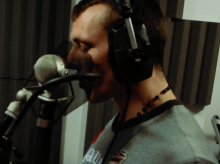 Sam in the studio recording his music track 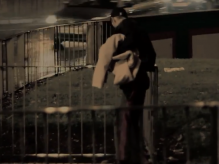 A scene from the Fixers music video

Crediting his love for music with saving his life when he was homeless, Sam Kirkpatrick is urging young people who have fallen on hard times to stay upbeat and never lose hope.

Having previously lived on the streets, the 25-year-old from Manchester wants others with similar experiences to focus on the positives and know there is help out there.

‘The streets can be a mean place and unless you’ve been through it, you can’t know what it’s like,’ explains Sam.

‘It can end people very quickly. I’ve seen it all and wouldn’t want my worst enemy to go through what I did.

‘Thankfully, even in the rough times, I had music.

'Writing songs and listening to others took me to another world. It kept me pushing through. It kept me alive.

‘I want people to know that if they set their mind to focus on something which makes them happy, they can get through anything.’

With Fixers, Sam has helped create a music video about his life on the streets.

He raps about his own experiences to show other homeless young people that there is light at the end of the tunnel.

Watch Sam’s Fixers music video 'Look Towards the Sun' at the top of this page.

‘I think the track is very powerful because it comes from the heart,’ he says.

‘It was emotional watching it back because the lyrics are about my life.

‘My aim is to encourage others like me to keep their heads up, no matter what happens.’

Sam played his music video and performed the track live to more than 100 people at Yfest, which was organised by Your Housing Group and took place at The Fuse in Partington on 21st March.

He was described by one audience member as ‘an inspiration’, with ‘an incredible journey’ and ‘a moving piece’.

Sam now hopes to share his film in local schools and colleges to further spread his message.

He adds: ‘The only reason I’m still here is because I kept going.

‘I want to be an example to others – showing them that anything is possible.’

From Homeless to Hopeful 2nd May 2019