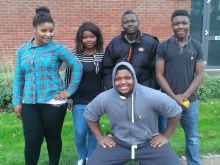 Sakina (left) with her team of young people 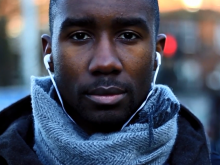 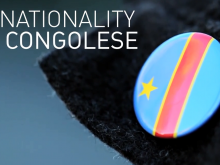 Having been a victim of racism in the past, Sakina Ramazani of Motherwell, North Lanarkshire, wants people to see beyond skin colour and not discriminate others based on their ethnicity.

Originally from The Democratic Republic of Congo, the 23-year-old says she was often called names in school, which made her feel like an outsider.

‘I came to the UK when I was quite young and because English isn’t my first language, it was hard growing up,’ says Sakina.

‘At first, you try and ignore the taunts because you want to fit in, but after a while they begin to make you feel really small.

‘Already in an unfamiliar place, the bullying makes you even more isolated. It's like you’re completely alone.

‘This is why I’ve decided to do something about the issue and hopefully stop this from happening to others.’

With the help of Fixers, Sakina and her team, who are all Congolese, have produced a film exploring the topic.

The short piece encourages the audience to stop making assumptions about people based on race.

Watch their film ‘Adjust Your Mindset’ at the top of this page.

‘We think the film is great,’ adds Sakina.

‘It’s very easy to make snap judgements about people these days, but it’s important not to let your views be driven by someone’s ethnicity.

‘We hope our project can stop that happening.’

The group are launching their film on social media to coincide with the International Day for the Elimination of Racial Discrimination on Saturday 21st March.

Sakina adds: ‘We want it to attract the attention of young people, show them what could be seen as racist behaviour and the impact it can have on others.

‘I know what it feels like to be singled out. If this campaign can promote equality and respect in other people, then we’ve done our job.’

Tamanna Miah is taking a stand against racial discrimination.