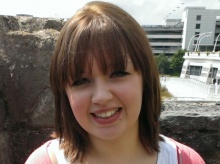 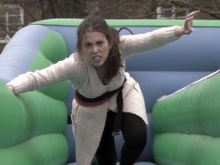 The film depicts a metaphorical struggle with abuse 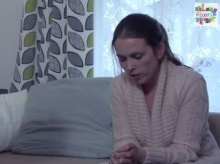 Worried that people in abusive relationships often feel trapped and unable to leave, Natalie Gresham is urging them to take the first steps towards seeking support.

The 22-year-old wants to show that it isn’t always easy to walk away from a violent partner, and is encouraging those affected to talk to someone they trust.

‘I am passionate about this topic because I think it’s often overlooked,’ explains Natalie, who’s from Marchwood in Hampshire.

‘I’m aware of people who have been in abusive relationships and I want others to know they’re not alone.’

With Fixers, Natalie has helped create a film to show the struggle faced by many people trying to escape domestic violence.

It addresses some of the reasons why they may find it difficult to remove themselves from an abusive situation.

‘They might not want to be alone,’ Natalie says.

‘Maybe they believe it’s normal to have a controlling partner, or they’re too in love to see that the way they are being treated is wrong.’

In the film, a woman is seen with a bungee cord around her waist. Each time she tries to move forward, she is pulled back, representing the challenges she faces in breaking free from an unhealthy relationship.

She is also seen speaking to a friend, who offers her the support and encouragement she needs.

Watch ‘Tension: A Film About Domestic Violence’ at the top of this page.

Natalie wants the film to be shown to teenagers from the age of 14.

‘I want young people to realise what abuse is,' she adds.

‘They should know that it is not normal to be in a relationship that doesn’t make them happy.’

If you or someone you know has been affected by domestic abuse, visit the National Domestic Violence Helpline's website.

This Fixers project was supported by Family Mosaic.

Recalling her own experiences of being in an abusive relationship, ‘Meredith’
wants to show others how to spot the signs of domestic violence.