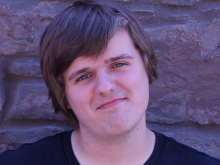 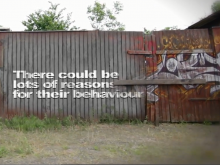 A message in the Fixers film 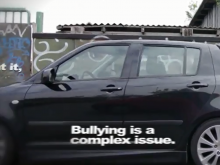 Knowing what it’s like to be called names by his peers, Dougie Noble wants to help tackle bullying by addressing the root causes of abusive behaviour.

Believing that many perpetrators have complex issues of their own, the 18-year-old thinks that understanding why people bully could be the key to stopping it.

‘I see things differently to most people as I have Asperger’s, so I was picked on,’ explains Dougie, who’s from the Scottish town of Coupar Angus.

‘It was hard to take at first and it made me wonder how anyone could be so mean.

'A lot of the time we focus on the victims of bullying and forget to deal with the reasons why it happens.

‘I’m not condoning what bullies do, but I think it’s important to understand why people behave in this way.

'Maybe then we can stop others from going down the same path.’

With Fixers, Dougie has helped create a film to look at life from a bully’s perspective and examine what drives people to act in certain ways.

Watch Dougie's film 'Project Bully' at the top of this page.

‘I think the film is extremely powerful,' he adds.

‘I wanted to show an alternative side to this issue.

‘It was difficult to look beyond my own emotions and experiences and see things from the bully’s point of view.

‘But until we deal with the root cause of bullying and understand the people who bully, we won’t solve the issue. This is what I intend to do with the film.’

Dougie plans on sharing the resource in secondary schools around Perth and Kinross.

‘I’m really proud of what Fixers have helped me to do,’ he says.

‘Hopefully we can now spread the message to other young people and stop bullying altogether.’

If you or someone you know has been affected by bullying, visit the Get Connected website for more information and advice.

After bullies made her life a misery, Stephanie Allen has a
message for others facing similar experiences.