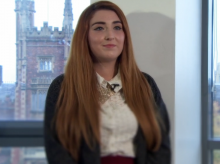 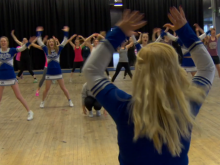 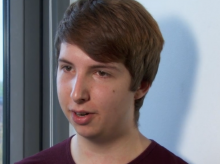 Breaking down negative stereotypes of cheerleading, a group of university students from Belfast are highlighting why the activity should be considered a genuine sport.

Their story was broadcast on UTV Live in December 2014.

Kerry Moore and Callum Phillipson, both 20, are part of a cheerleading group and say they have personally experienced the emotional and physical benefits of the discipline.

‘In just a year, I feel like I’ve completely transformed my life,’ says Kerry.

‘It was something I could never have imagined.

‘But we do occasionally get quite sexist comments walking about in our uniforms and sometimes aren’t treated with the respect we deserve.’

Callum adds: ‘I did view it as a silly activity for girls, who threw around pompoms and made a lot of noise; but now, I see it as a really difficult and strenuous sport.’

With Fixers, the group have helped create a film to challenge the misconception that cheerleaders aren't dedicated sportspeople.

Watch their film 'To Encourage and Inspire Through Cheer' below.

Kerry, Callum and other members of the Queens University Belfast cheerleading team, demonstrate some of the moves and training required in the TV piece.

Team Captain, Caitriona Keenan, features in the broadcast, explaining how demanding the activity can be.

‘We come in, we condition, do core work, cardio and train really hard,’ says Caitriona.

‘People go to the gym to lift weights. These young people are lifting each other. How can you say that’s not a sport?’

In addition to improved fitness, Kerry says cheerleading has helped her overcome challenges in her life and now wants others to give it a go.

‘A year ago I would never have seen myself doing this,’ she explains.

‘For me, cheerleading was about overcoming my anxieties and I’m so proud of myself. It’s not easy to take yourself out of your comfort zone, but sometimes it’s necessary.

‘Once you’re out there, you’ll feel all the more better for it.  You don’t know until you try and you might end up surprising yourself.’

A group of Fixers, wanting to change negative perceptions of pole fitness
and aerial acrobatics, are using a film to tackle misconceptions.