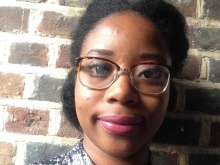 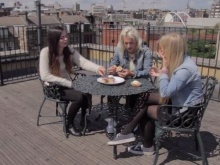 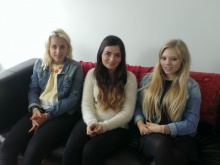 Friends in the film describe each others appearance

In a society filled with airbrushed images, 24-year-old Juliana Appiah-Dankwah from London is reminding people to see the beauty in their individual appearances.

She is encouraging young women in particular to view themselves – and their imperfections – more positively.

'Body confidence is such a big thing,' explains Juliana.

'The way others feel about how they look has an impact and can even hold people back from things they really want to do.

'I want girls to embrace themselves and be happy in their own skin.'

Currently creating her own lingerie line for women with different body sizes, Juliana is asking others to promote healthy body image by highlighting the positive attributes of those close to them.

'It's always nice to have an ego boost, especially from those who care about you the most,' she says.

'Friends and family often see the best in you and can help highlight how great you are in ways or areas that you may often overlook.'

With Fixers, Juliana has created a film that shows a group of young women describing each other's features - all three members presenting different opinions over physical traits.

You can watch Juliana's Fixers film 'Body Image: A Matter of Confidence' at the top of this page.

'The girls talk about what they like about each other and what they dislike about themselves,' she explains.

'They were very raw and honest about their thoughts, which a lot of people can relate to.'

Wanting to use social media to share her film, Juliana hopes to encourage others to think differently about themselves, using the hashtag #complifriend.

'I want to see a ripple effect of people sharing what it is that they like about their friends,' she adds.

'As humans we're always going to have things that we're self-conscious about - but those are the aspects that make us unique and are often what people appreciate and love about us the most.

'Celebrate your differences – the world would be boring if we were all the same.'

‘No one looks the way they do in magazines – not even those in them!'
Fighting against the pressure to look 'perfect', Carys Hill is promoting
positive attitudes towards body image.