Mums Not Monsters Fix On ITV 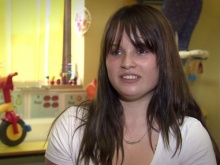 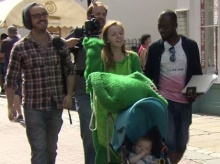 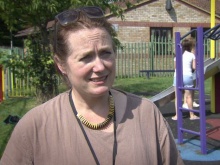 After becoming mums to babies Oscar and Theo in their teens, Rebecca Clout and Bethany Luney want to challenge negative perceptions of young parents.

Their story was shown on ITV News Meridian (E) on Thursday 4th September.

Members of the Canterbury Young Active Parents Group, the Fixers are hoping to break down the stigma attached to teenage mums as they feel they’re judged unfairly due to their age.

‘We get negative thoughts and opinions all the time,’ explains Rebecca, who’s 16.

‘Everyone’s so rude about us.’

‘Sometimes I don’t even want to walk down the street with my child because I feel so put down by people looking and staring at me.’

With Fixers, Rebecca, Bethany and the rest of their group are helping to create a film to show that young mums aren’t monsters.

They’re relying on a distinctive bright green costume to get their message across.

‘Walking down the street dressed as a monster doesn’t make any difference to the way people treat me.’

Alison McGuigan, a support worker from Canterbury City Council, also appears in the broadcast in support of the campaign.

‘A lot of people think young mums are irresponsible. Actually, it’s the opposite - they are very responsible,’ she explains.

‘They’re doing a hard job bringing up their children well.

‘They’re also working to either stay at school, go to college or find apprenticeships, while at the same time coping with the negative attitudes of other people.’

‘Some of us may have made a mistake – but we got something beautiful out of that.’

Lauryn Breslan has experienced verbal abuse from strangers for being a
young mum. Watch her TV story.