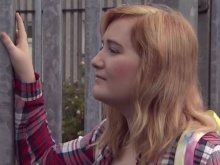 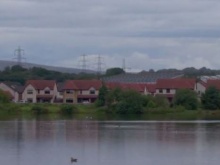 A scene from the broadcast piece 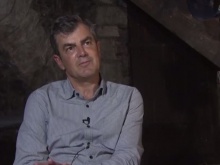 Film producer David Brown is interviewed in the broadcast

Lizzie Clark from Cumbernauld wants to challenge negative perceptions of her Scottish home town, and is hoping a Hollywood producer will help her sway public opinion.

Her story was broadcast on STV Glasgow’s Riverside Show on Thursday 28th August.

The 19-year-old is determined to improve the reputation of Cumbernauld, which she feels is given a bad image.

'But it’s been redeveloped and it’s a lot nicer to live in than they think.

‘My project is to tackle the stereotypes attached to Cumbernauld and the young people who live here.’

With Fixers, Lizzie has helped develop a print campaign to discourage people from making unfair judgements.

Click here to see the design and read more about it.

Having provided the setting for the 1981 movie Gregory’s Girl, Cumbernauld has recently hosted film crews for US TV series, Outlander.

Lizzie hopes the positive media attention will make people think twice before being critical of the town.

‘Most people view Cumbernauld negatively - not as a very good environment,’ she says.

‘But because this series is being set here, people might do a double take.

‘Perhaps they’ll think, maybe it is a nice place because they chose here and not somewhere else.’

Producer David Brown, who’s working on Outlander and whose film credits include Star Wars and Nanny McPhee, appears in the broadcast in support of Lizzie’s campaign.

‘Cumbernauld is fantastically well positioned in terms of being central within Scotland,’ he explains.

'We have gathered specialists from all over the country, all over Europe, and the US to make this show and bring it into Cumbernauld.

Lizzie adds: ‘Some expect that young people will disrespect and disregard their environments.

‘It would be good if these young people were to show more enthusiasm for their home town.’

Keen to encourage people to overcome negativity and love where they live,
Ryan Lewis has taken his campaign to the streets of Bristol.