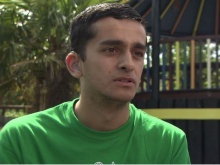 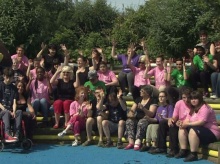 Denis and his team in Margate 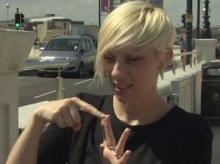 Determined to show people that shouting isn’t the way to communicate with someone who’s deaf, Denis Miko is encouraging others to learn sign language.

His story was shown on ITV News Meridian (E) in August 2014.

The 18-year-old from Margate in Kent attends the Royal School for Deaf Children and is one of an estimated 156,000 people who use British Sign Language at home in the UK.

‘If someone is talking to me, and talking and talking, and I don’t understand, then some hearing people will think I’m not on the same level as them,’ Denis explains.

‘I do feel angry. I just want to tell them to stop lowering my confidence. I am human after all.

‘I’d like all hearing people to learn how to be deaf aware, to learn sign language and to finger spell.

‘If a hearing person shouts – a deaf person can’t hear.’

With Fixers, Denis and his team held a flashmob-style event in Margate to teach local people basic signs and encourage them to give it a go.

The group wore colourful t-shirts marked with diagrams to illustrate the handshapes needed to communicate the letters of the alphabet.

Zoe Hammond, from the Royal School for Deaf Children in Margate, also appears in the broadcast in support of Denis’ campaign.

She explains the challenges encountered by deaf people when they’re faced with those that don’t know sign language.

‘When they’re out and about in society, they need somebody with them all the time to interpret,’ Zoe says.

‘They can’t communicate a very basic need – I want the toilet, I want to buy something in a shop, or help me, I’m stuck, if there’s a real problem.

‘It causes a feeling of isolation and I think that’s the biggest difficulty they face.’

Denis adds: ‘As a result of our project, hopefully hearing people will want to learn a bit more about deaf culture and be more deaf aware.

‘It would be great if we can achieve that.’

Keen that a person’s deafness doesn’t prevent them from getting a job,
Fixer Zoe has a message for employers. Find out more about her campaign.